Christian College’s Deb Singleton has made 20 trips to East Timor since 2005. We met with her and visitor Samuel to find out why. ‘Howard Williams, Chairman of the Christian College board, organised a mob of dairy cows to go to Fuiloro Agricultural College, quite far from Viqueque. However, a little later, Viqueque was designated the official twin town for Geelong. In 2003 a group from Geelong visited this village in war-torn Timor-Leste (East Timor). 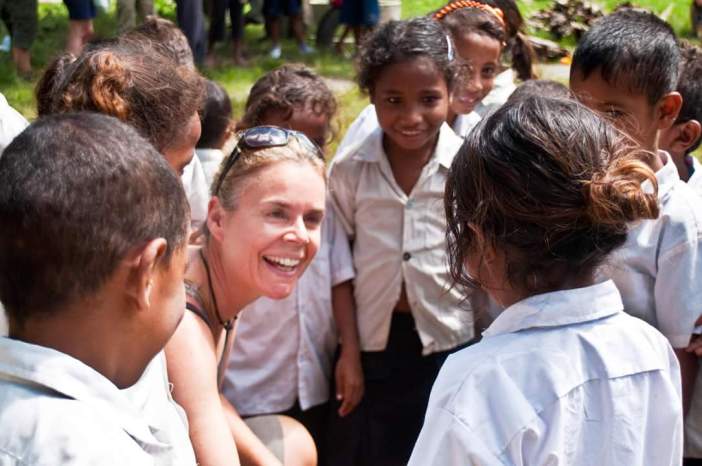 Whilst in Viqueque the group encountered Maria. She was originally from this village but went on to live in Portugal for 10 years, then Sydney for 10 years. She was a real change-maker, setting up the Friendship House, a community hub in Viqueque in 2004.

Samuel, the Coordinator of the Friendship House, is currently visiting Christian College for all of Term 3. He is studying to be an English teacher and he has noticed that we teach using so many different strategies, whereas in Timor-Leste they tend to employ the ‘chalk and talk’ method.

My first trip was in 2005. I was part of a group of teachers who went over to mentor teachers from Timor-Leste. That same year we had a reciprocal visit from a group of three students from Viqueque, the first Timorese to come to Christian College. Two of these students went on to earn scholarships to Cuba where they spent six years studying to become doctors. They now practise in Timor-Leste.

Highlights since those early days have included the primary schools built in 2010 and 2012, as well as five education conferences held involving teachers from Christian College and Viqueque. We covered Educational Best Practice while being sensitive to the issues they face, such as huge class sizes.

Then in 2014 there was the Water Project. Access to clean water allows kids to stay healthy and attend school regularly. We set up two toilets each for boys and girls, handwashing facilities and two farms also benefitted from the water project. It was a whole community effort. The women of the community cooked for the workers and, in turn, their children benefited from the project.

Most years Christian College sends around 24 Year 12 students to visit Viqueque for nine days in July. Then in September 15 Year 11 students usually visit for two weeks as part of Christian College’s ‘Our World’ subject. Timor-Leste is the perfect case study from all angles: the students get to visit primary source material. 13 years on and we have ex-students who love going back. As East Timor Liaison Director for the school, I’ve now made about 20 trips there myself.

The legacy is living on. We believe in succession planning. It is important to keep the community hub vibrant and sustainable. For example three volunteer teachers started working in the registered kindergarten that runs out of the original Friendship House. Several years on, they are now employed by the Timorese government. Meanwhile, Samuel’s son now attends that same kinder.’