The #HumansinGeelongExpo held on Sunday October 8, at Deakin University Waterfront Campus has been described as a vibrant, diverse, inspirational celebration of Geelong and district! 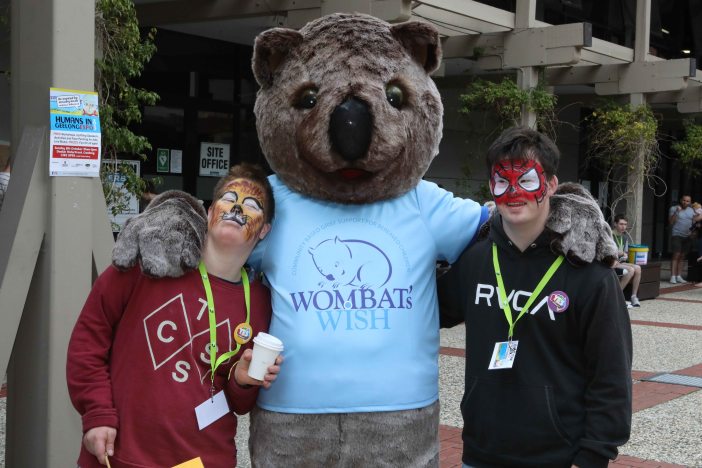 The Expo saw 44 amazing groups exhibiting, 16 thought-provoking speakers, 8 uplifting performances, the boat building display put on by Peter Doyle from the Royal Geelong Yacht Club and the Syrian refugees, Cycling Without Age, dance demonstrations, crafts for kids and lots of fun! We had 40 enthusiastic student volunteers, from St Joseph’s College Geelong, Belmont High School (Victoria) and Better2gether. There were an additional 25 adult volunteers apart from the voluntary Humans in Geelong team.

One of the key features of its success was it being a free community event with something for everyone. Activities included workshops, live music, face painting and presentations by uplifting speakers. The speakers, too many to list in this article, represented a range of inspirational locals.

Together with the exhibitors they demonstrated and uphold the values cherished by Humans in Geelong; creativity, empathy, connectedness and engagement. Their stories can be found on the Humans in GeelongFacebook page and website www.humansingeelong.com

The range of themes was diverse and engaging, Geelong Sustainability, Geelong for Marriage Equality, Decluttering, Clever Housing Design, caring for the disadvantaged and elderly and how to be a Hero Hero Town Geelong, to identify only a few. Add to this Phillipa Challis’ Laughter Yoga, Roxie Bennett’s vision of Geelong, Sarah Kenworthy the 2016 recipient of the Victorian Young Achiever Award for Volunteering, Stephanie Woollarddiscussing Seven Women and Music Thanatologist Peter RobertsMusic’ celestial meditation music.

Stall holders were unanimous in commenting on the value of the Expo offered their cause. Comments included: ‘Great exposure for us. It’s important people know that we exist’, Geelong Irish Society. ‘Great opportunity to promote the Barwon Network of Neighbourhood Centres and make connections.’

Jan Johannesen from Bali Smiles said, ‘It is an opportunity to raise awareness of the other side of poverty in other countries. We deal with the poorest of the poor.’ ‘Filling out a star at Wombat’s Wish was a lovely experience.’ Tara McKinty from The Sanctuary Counselling Centre and the stallholders from Anam Cara Geelong valued the interaction between other agencies that the Expo offered and agreed that their guests will benefit from the Expo.

It also provided an opportunity for the public to meet them informally, ask questions and ‘break the ice’. Marianne Messer from careers Geelong Region LLEN voiced an opinion held by many, ‘Meeting and sharing is what Geelong does well.’
Kate Kroeger from The Confidence Company loves the sense of connectedness that the Expo demonstrates, ‘That is why I choose to live in Geelong.’

Girl Guides Australia leaders, Bilby (39 years’ experience) and Camellia (28 years) were grateful to be able to demonstrate that ‘Guiding is still alive.’

Em McDonald of EDUC-Nepal voiced the common thought, ‘It is great to connect with like-minded people.’
Peter Roberts encouraging remark that resonated with his audience, ‘We don’t always know the effect of what we do.’

The Expo would not have been a success without volunteers. Jacqui Bennett recognises this, ‘A HUGE thank you to the volunteer team of eight who have worked so hard on this over the last few months!’ But the act of volunteering has its own rewards as supported by these thoughts; ‘exceeded expectations,’ ‘rewarding,’ ‘inspiring,’ ‘exciting, innovative, new to Geelong’, ‘an uplifting experience’, exhausting but fun’, ‘gave me a sense of belonging’, “just the direction Geelong was looking for’, ‘energising’ and ‘makes me want to do more!’

What next for Humans in Geelong? Initially, an after party to thank all who participated. As for the Expo’s future, the team has applied for a Geelong, Victoria Festival’s grant and hopes that the Expo will continue to run for the next 3 years, at least. If the success of 2017’s Humans in Geelong Expo and the exhilaration of the 1,500 people who attended is the yardstick Expo 2018 is a given!