Who said kids these days don’t care? A group of us were extremely fortunate to attend the Highton Primary School Exhibition that proved the exact opposite. The Exhibition, presented over two days last week by Grade 5 and 6 students, is the culmination of the seven years spent at this International Baccalaureate school. The International Baccalaureate is a unique, worldwide education system where the focus is on inquiry while displaying empathy, tolerance, understanding and ultimately taking action to make a difference.

‘Each year the Exhibition just gets better and better’ noted Ms @Carly Stafford Acting Principal. This year’s transdisciplinary theme was ‘Sharing the Planet’ allowing students to inquire into causes. As a provocation, students were treated to guest speakers, many sourced from the Humans in Geelong website such as Jeff Smith of CREST, Alison Marchant anti-fracking, Jan Johannasen of Bali Smiles, Liz Lester re caring in Ethiopia. Students then chose their line of inquiry and took action, most in small groups, some individually.

Displays included a blackened-out room where you experienced what it was like to be blind and shopping or making breakfast. There was a fashion parade of ethically sound clothing. Another group listed major clothing brands who were and weren’t ethical. Many groups had made beautiful books on their topics of stereotyping, feminism and bullying. One group inquired into the alarmingly disturbing facts of the lack of schooling for girls worldwide. Visitors took quizzes on dyslexia and played board games made to raise awareness of random violence in sport. The Homelessness group put together care packages that will be distributed to people in need. 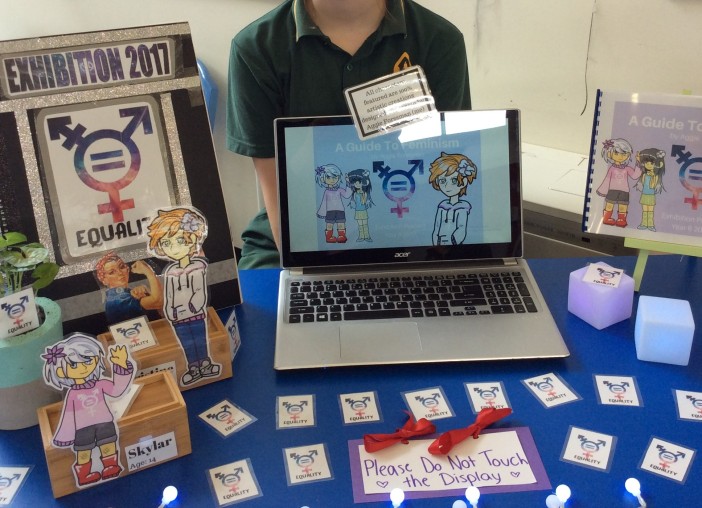 Powerpoints and websites, to demonstrate their learning, were made by 80% of groups. Ten groups focused on sustainable practises such as renewable energy, recycling and e-recycling. One student designed a website about sustainable transport. You couldn’t choose a group that stood out as each was outstanding.

The future is in good hands!

I am proud to say that teaching in this IB school for the last ten years was the inspiration for Humans in Geelong which aims to feature locals who are making a difference and to showcase sustainable practices, creativity and opportunities.