Imagine playing ice hockey in 46oC. Here’s an update from the geetroitsuper7. “The entire time in LA was hot and the temperature didn’t get below 40. It was a tough tournament, firstly playing in the AAU Club tournament where they played against kids who have played as a team regularly (where the Aussie kids were from all over Australia and hadn’t even had a training together). U14 won gold in the club tournament and u12 won silver. 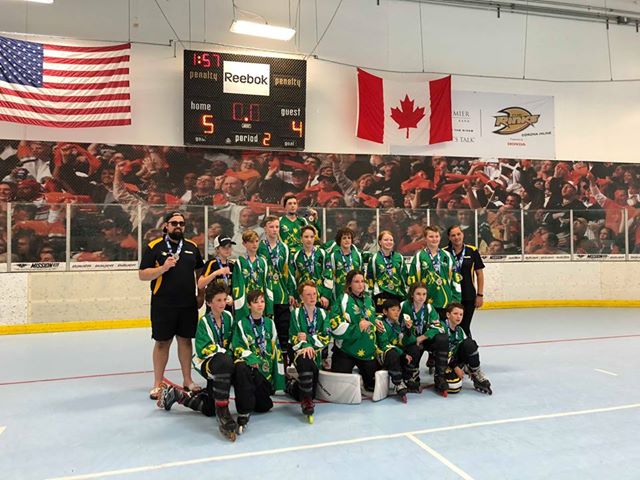 In the Junior Olympics, U14’s made it into the top 4 teams, which meant they were playing for Bronze in the Finals in the AAA finals (AAA I think refers to elite hockey players from USA and Canada). They fought hard, didn’t win but came back knowing they had made it into the AAA Finals, came fourth and played against some extremely competitive players. Hockey in the USA and Canada is like AFL in Australia.

The U12’s didn’t make it into the AAA finals in the junior Olympics but played for gold in the AA finals and unfortunately lost but came home with Silver.

They all played well, scored amazing goals and defended strongly against opposing teams.

Our boys from Geelong were proud to wear their Australian uniforms and represent Australia and enjoyed their experience staying with their teams.

Codey Funston won fastest shot with 85 miles per hour during a skills test at the Junior Olympics. Jed Lake scored a hat trick and scored three goals during one game.

Sai and Codey were back in the country for just over a week and then flew to Canberra with the Victorian ice hockey team to represent Victoria in the Defris Championships and brought back the silver medal to Victoria.

Jed is currently representing Victoria (IHV) in Ice Hockey. Kyle & Riley are representing ACT (IHACT) in the Ginsberg Ice Hockey Tournament in Melbourne at the O’Brien Group Arena. Victoria have won every game so far!

This clip is about the ice hockey nationals that are currently on now and ice hockey in Australia. https://www.olympicchannel.com/en/playback/olympic-outpost/olympic-outpost/an-unlikely-ice-hockey-tradition-continues-down-under/
Story sourced, from Paula Funston, by Jacqui Bennett. Photos: supplied, Gold medal from AAU Club Tournament. A tradition at hockey tournaments is to swap jerseys, Kyle swapped his jersey with a USA player in one of his final games.

Hope to see you at the Humans in Geelong Expo on Sunday 7th October, 10-3pm Deakin Waterfront.