“This story that I heard at the University Scholars Leadership Symposium about Humanitarian Affairs, affected me the most: It was about 9-year-old Ian from Shanghai. We all remember the joyful memories of playgrounds right? Well, Ian grew up surrounded by friends from all over the world in his International School but he quickly learnt that most children in Liberia, West Africa have never seen or even heard of a playground before… This didn’t sit right with Ian so he decided he’d change this. 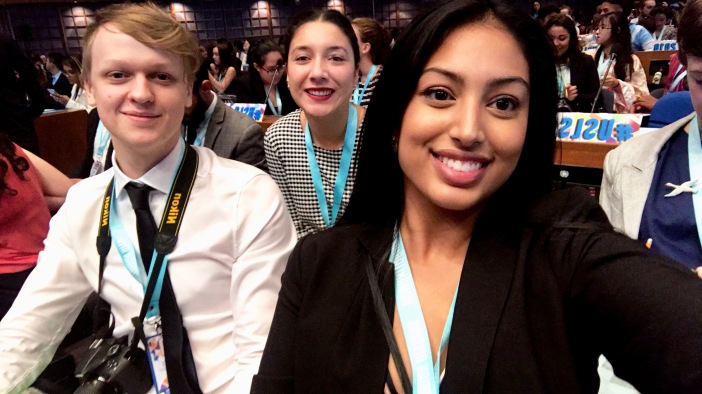 “With the help of google and a few emails sharing his vision to one of the senators in Liberia, Ian was soon the proud owner of 2 empty soccer fields…yet still without a playground.

“Using online resources only, Ian found a company that takes old playgrounds and ships them around the world but he needed $82k to support this – he told his teacher, classmates, family and friends about his plan and before he knew it the entire community was supporting his vision.

“Just 4 months later Ian, his mum, the senator and the vice president stood at the opening celebration and cut the ribbon for the playground in Liberia. Now at 14 Ian is still supplying playgrounds and has built schools and medical clinics.

“This made me realise that all you truly need is determination, coupled with unity, to truly achieve the seemingly impossible tasks.” We hear from Deakin Nursing Graduate Simren Kaur Kanwar. “At the symposium it really was an indescribable feeling being surrounded by diverse young leaders who, despite having achieved so much in a few years, cared more about making a difference than pursuing their own self-interests.

“During my volunteering position with Fairtrade Deakin I was blessed to hear from Molly Olson, the CEO of the Fairtrade Association of Australia and New Zealand (FTAANZ) at the Fairly Educated Conference (FEC) 2016. Here I realised the importance of the Sustainable Development Goals and how reaching their targets is essential for human development.

“I have a longstanding passion for children and family health and am excited to be embarking on my next journey at The Royal Children’s Hospital. This puts me in a unique position to not only care for children but also educate them on health promotion and prevention, to help them grow strong mentally and physically and to continue brewing wonderful ideas in their whizzing minds.

“I have always had a strong desire to learn more about refugee and asylum seeker health. Fortunately, at the symposium, I was able to hear from a representative of the International Organization of Migration (IOM). I was stunned when I discovered approximately 68 million people are forcibly displaced due to violence, war, outbreaks or natural disasters. 44% of this population are currently being exploited through modern slavery. I heard stories about the hardships these people encounter during their migration that makes them susceptible to diseases along with poor mental health.

“On our service day at the symposium, Tiarney and I had the privilege to take refugee children to Safari World. It was surreal hearing their stories first hand. One day I plan to volunteer as a medical aid in Somalia or Myanmar, which are just two of the 5 countries that make up two thirds of the globe’s displaced population.

“Hearing about 9-year-old Ian made me realise he didn’t have a lot of resources, yet he changed the world because he led in a direction that he knew was just and right, and inspired others.

“Overall, I realised we probably all desire for a more just world.”