“When I was younger and watched my brothers play footy, I was so jealous because I thought it was out of my reach,” Geelong Cats AFLW forward Danielle Orr said. “It’s been awesome for women to get this opportunity to play footy because the younger kids often think it’s just a dream for boys to play AFL.” 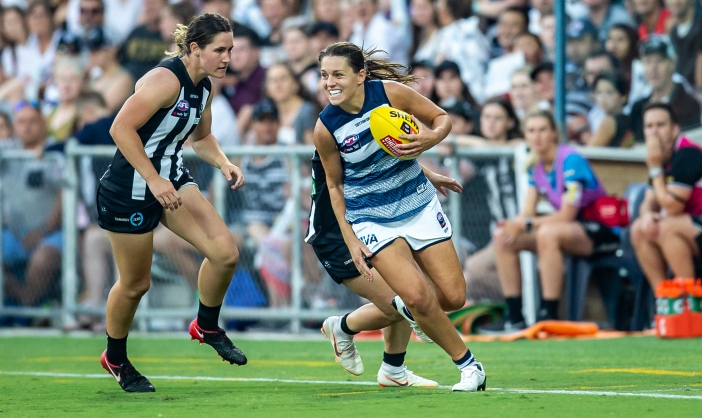 Danielle only started playing VFL footy two years ago when it was announced that Geelong were going to be given a team in the AFLW. She grew up in Geelong and has lived in the area her entire life. Generations of her family have lived and played footy in Geelong, so for her to have this opportunity is very special.

“Geelong having a team was the first thing that got me interested in playing football competitively,” Danielle recalled. “I’ve always loved footy, I was constantly down at Kardinia Park when I was younger, going to all the Cats’ games.

“But I played netball and basketball growing up and concentrated on netball for about the last ten years. I played at Newtown & Chilwell Football Netball Club pretty much from when I was 16 and played my juniors at St Joseph’s Football and Netball.”

Late last year, Danielle was signed by Geelong and officially gave away her netball career to play AFLW. Despite only having two VFL seasons of experience to call on before hitting the big league, Danielle has used them to establish herself as one of Geelong’s top goal scorers.

“Obviously going from a completely different sport, the transition has been challenging at times. I’ve had to get used to the size of a footy field compared to playing on a smaller netball court, and the different fitness levels that entails. One of the good things is that the zoning, agility, coordination and things like that come in handy from playing other sports. You’re also starting from scratch so you’re like a sponge – you just absorb all the knowledge from the coaches. So, it’s been a positive as well.”

Like many AFLW players, Danielle still has a full-time career as a health and psychology teacher at Clonard College in Geelong. This position allows her to see the positive impact of the new AFLW league on young girls.

“There are so many girls that come up to me that say they watched my game on the weekend or even travelled up to Melbourne to watch. I think just watching it live makes it real for them. Having these home games at Geelong allows this to happen and makes it really special. I know some of the girls have started up footy just because of that.

“It’s awesome that they can see us and be inspired to play footy. It gives them confidence and a purpose to play footy when they’re younger because they can ultimately aim to reach that goal of the AFLW.

“It’s not only the young ones too, there’s so much support that I’ve received from my workplace or just people that I run into at the airport. The amount of support that we’ve had in the past few years for the VFL team has been incredible. What I’ve heard has been all positive. I’m so fortunate to have been given this opportunity and thankful to the AFL and Geelong for giving me a chance.”