“Being in a place so long, it will be very hard to leave but I feel the time is right – despite a few students saying ‘No, come back for another year’. I’m tired and the ever-changing demands placed on teachers by the Department make it difficult to just do what most of us love doing – being in the classroom, shaping the lives of young people. I will miss the staff and other community contacts, I will miss my car-pooling buddies, but most of all, I will miss the kids.” 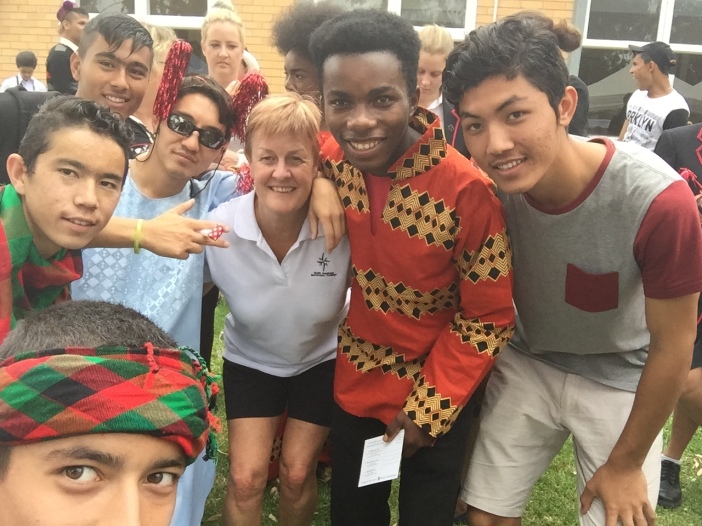 Julie Elkin sees the conclusion of her working career as she moves into retirement at the end of the year. Born and raised in Geelong West, Julie went to Bell Park High School (now Western Heights), went to Uni in Melbourne and returned to Geelong to start teaching.  An employee of the Department of Education for close to 41 years, Julie has spent two thirds of her teaching career at North Geelong Secondary College, beginning in 1979. Julie’s life was not always in the classroom. Add a dairy farmer to the mix. “I found that really interesting but demanding work. The scientific part of managing the growing of the pastures, the irrigation techniques and the feeding in the bail to maximise production appealed to me. The getting up early and hosing down the yards in the middle of winter with frozen water in the pipes, not so much!”

“I still keep in contact with many of the students from past years. I have been invited to weddings, birth celebrations and New Year celebrations for the various cultures. This is what I have loved the most from teaching at North Geelong. From the start, the school has hosted many different cultures and nationalities and I’ve been there for all the waves of migration that have made Geelong the multicultural city it is. The fact that, by and large, all these kids get along is the best thing about our school!

“Many of our students have gone on to excel in their chosen field, though their achievements have possibly not been that well publicised. We’ve had award-winning builders, authors, newspaper editors, actors, lawyers… I think one of the talents that many of our students possess is that of resilience. To come from another country and to have to adapt to our way of life, and to do it so successfully, is truly worthy of respect.”

Julie is also an avid community volunteer, being a member of the Sponsorship and Race Committees at Geelong Cross Country Club, and is a volunteer for Orange Sky Laundry which is an organisation that washes clothes for those who need the service. “I’ve been influenced by my Mum and Dad (when he was alive). They both gave back to their community in that they were involved in Geelong West Scouts for a long time. Dad also drove Meals on Wheels vans. Mum is still involved in the Guide movement. I suppose that is where I get a bit of my giving nature from. I find myself still giving to past students – I often get contacted to see if I can help with this or that. I feel privileged that they feel connected enough to contact me when they need assistance, or just want a chat.” Julie also loves a good walk.

So, what is next for Julie? “Initially, some rest and recuperation. Then a 600km walk in England, and a nice long holiday. I’m also moving into a new apartment, so it will be a whole new start for me in more ways than one.”

Photo: Julie at Pako Festa with North Geelong students in 2016