‘When someone needs helping, you just do it but sometimes it keeps you awake for a while afterwards.’ Neil has been part of the Winchelsea SES Unit for 8 years. He has 3 children and 4 grandchildren and a sausage dog as well as a full time job. Yet he finds the time and energy to give back. He says it is about making him feel good by helping others. 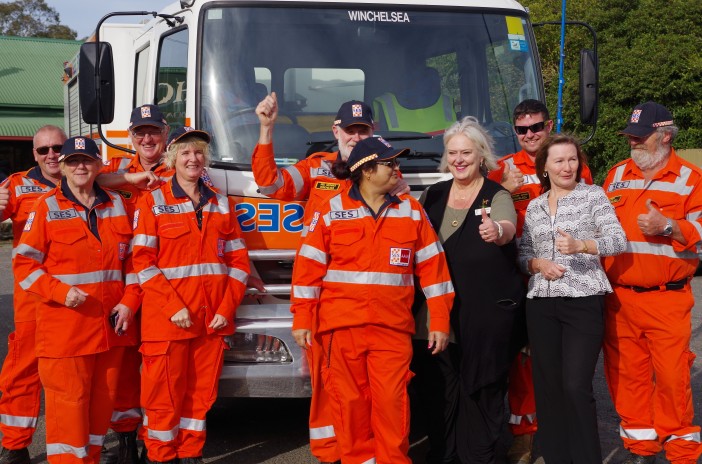 ‘The SES evolved from the old Victorian Civil Defence Organisation which began in 1950. It is manned by volunteers and helps with a wide range of activities. There might be trees over the road, or road accidents where sometimes we’re the first at the scene or we have to cut the casualty out. We have lots of training to help us deal with these situations. Often jobs can take several hours. When someone needs helping, you just do it but sometimes it keeps you awake for a while afterwards.

Sometimes we deal with incidents caused by drug-affected drivers, like a truck driver we had the other day who was full of ice and trying to kill himself.

We have 15 members in our unit of volunteers. They generally work full-time elsewhere. There are a couple with First Aid backgrounds, otherwise it’s a bit like a Dad’s Army. We’ve had an 18 year-old girl join and we hope she might bring a friend or two. Roughly a third of our group are women.

Being in a rural setting we get to do animal rescues too. There was a Jack Russell stuck in a drainpipe near the church and we had to dig him out. He was very appreciative. Then there was the time a cow had got stuck in the river. By the time the boys turned up there were some well-meaning girls there who had stripped down to their knickers and bras and were in the freezing water trying to get it to move. Once someone rang because there was a goat stuck on a ridge and we had to explain ‘that’s just what goats do!’

My most moving moment was when I was organising a few things at the unit headquarters and a woman pulled up outside. I was in a hurry, so in theory it wasn’t a good time, but when she said she just wanted to say ‘thank you’ as we had cut her free of her car and saved her life, that brought me back to earth. She had her kids with her.

The role has given me lots of training and accreditations. All the courses are paid for so it’s a great place to top up qualifications. If you volunteer, you are also getting yourself out there and getting known. I’d recommend it to anyone trying to find a job.

The photo is of our crew and new truck “Tina” affectionately named after one of our members who recently passed away.’