What film makers, Jesse Leaman (22) and Taylor Adams (26) lack in age and experience they certainly make up for in enthusiasm and talent. There is a strong bond between the two collaborators. ‘We are like two sides of the same coin, laughs Taylor, Jesse visualises and I write. Together we are like one really talented person.’ ‘Yes, you complete me’, jokes Jesse. They first met in 2013 and five hours later, found themselves still chatting.’ Finding their ideas compatible and inspiring they entered the 2014 Los Angeles, 48 Hour Film Project under the banner of Leaman Films. This film competition allows competitors 48 hours to write, film and submit a short movie. Each competitor is given a specific line of dialogue, a character and prop to include. Leaman Film’s Exscriptus, was placed second in the competition. Although Jesse had been making films since Grade 7, this was Taylor’s first foray into scriptwriting. 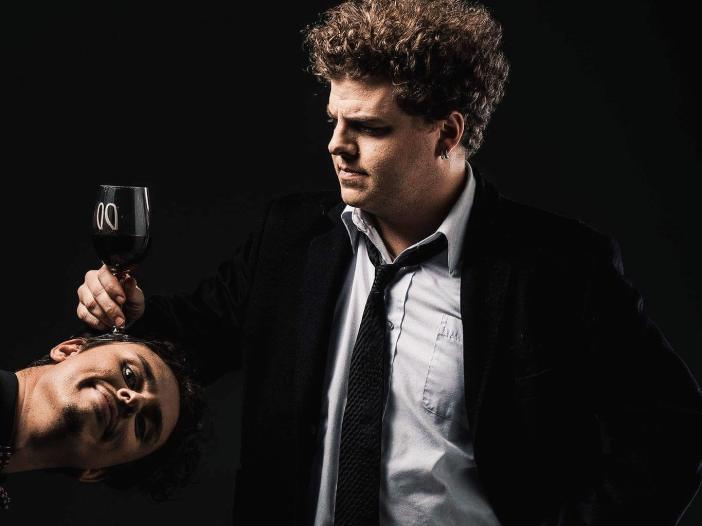 Jesse, the ‘shyest kid in school’, struggled with reading and writing. Although he loved acting, he didn’t believe in his talent. ‘I never trusted a compliment, entirely. I thought my mum contacted everyone to encourage them to say I was good.’ Weekends and holidays were spent making films with family and friends and by Year 10 film-making became the career of choice. Taylor, an avid reader since beginning school, ‘fell in love with the idea of using words to shift emotion. I was driven by the need to move people, change the way someone feels, the power in feelings and emotions and the ability to manipulate them.’

In 2015, world renowned actor, Guy Pearce, who grew up in Geelong, agreed to star in their short film, Lorne.  Not averse to taking risks, Jesse asked a mutual friend to negotiate with Guy and was shocked when Guy read the script and agreed. ‘The character Lorne is a wasteland traveller dealing with the boundaries of isolation, confronted by a mysterious stranger who helps him realise his existential fears. A complex character who aches for normalcy in a dangerous, post-apocalyptic world.’ Taylor and Jesse are grateful for the support and professionalism Guy brought to the role. ‘I was so lucky as a 20-year-old, to have the opportunity to write for and direct, Guy Pearce.’  They entered Lorne in several international, Academy Accredited, Film Festivals including, Los Angeles, France, Estonia, Rhode Island, Bondi and one in Palm Springs which they attended together. Unsurprisingly, Guy’s reputation demanded the finished product be of the highest quality. After watching the final cut with Guy, Taylor and Jesse were delighted when he said, ‘Let’s make the next one, a long one.’

Currently, Taylor has two scripts in development for Leaman Films. One is a feature film, a psychological thriller titled Long Exposure. Naturally, with the intention of engaging Guy Pearce, it features a strong, male lead.

There are several factors that determine a successful, working partnership. Jesse believes it is important to ‘surround yourself with people with the same energy as you’.  And, with regard to mutual respect, this talented duo mine gold. ‘Jesse is a walking ray of sunshine. He is the most driven, confident, person I know. He’s my positive anchor’. And of Taylor, Jesse says, ‘We are so in tune, Taylor finishes my sentences, he knows what I am going to say. He is one person I can hate and love at the same time.’ Their message for young, aspiring film-makers? ‘If you want to do it, do it! Take risks.’

Currently, Lorne is contending with 24 short films for first place in the Australian Film Industry’s, AACTA, Social Shorts, Drama Category. If you would like to watch Lorne and vote for it, do so before August 6th: http://www.socialshorts.com.au/drama/

Written by Jacqueline Connor. Photo: Jesse Leamon on the left and Taylor Adams of Leaman Films.