“My journey into climate activism has been rather steady, it was only this year that I committed to volunteering with the Australian Youth Climate Coalition, (AYCC), but I have always had an interest and concern for the environment since I was in primary school. At that time the news reports of melting ice caps and animals facing extinction was something I tried not to think about purely because it terrified me.” We hear from AYCC Geelong’s Caitlin Ramsay, who recently presented HERSTORY at the Geelong Library. 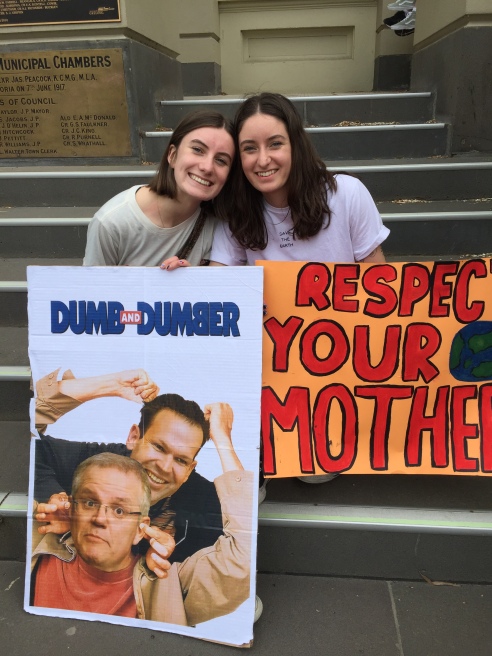 “As I got older, I started to understand how politics works in Australia. About the tight grip the fossil fuel industry has on our major parties and the economic and political systems we live under that create capital gain for a few but exacerbate poverty and inequality for many others.

“My wake-up call to get up and do something was last year when the UN announced that we have just 12 years to halt the crisis before it becomes irreversible. I had some sleepless nights and went down a few rabbit holes researching what was going to happen before finally accepting my fear and deciding it needed to be channelled into action. I attended the Melbourne Global School Strike with my sister and 50,000 other people. I was very emotional that day looking around at everyone who was there and feeling so much hope.

“This year I became a volunteer with the Australian Youth Climate Coalition which is the largest youth run organisation in Australia that aims to empower and educate young people, run campaigns, shift the narrative and build a movement. I love being a part of AYCC because of its inclusivity and diversity and that climate justice is at the core of everything we do.

“AYCC also works in close partnership with SEED which is Australia’s first Indigenous Youth Climate Network, acknowledging that First Nations people are on the front lines of climate change impacts and we have a supporting role to play. AYCC is running a campaign at the moment against GHD the engineering company contracted to build Adani’s mine and rail with events like weekly flyering sessions outside their offices nationwide.

“Since April AYCC Geelong has organised school strikes, an art exhibition and a clothing swap fundraiser for AYCC & SEED, we have also just begun a weekly flyering session outside GHD’s office at 43-45 Brougham street, every Thursday from 4-5pm, we hope you can join us.

“This year has been an enormous learning curve for me and I am still learning every day. Perhaps the greatest lesson I have come away with is that climate change is not just an environmental issue but a social justice issue. Those who have done the very least to contribute to the problem are suffering first and worst. It’s also about acknowledging those who work in fossil fuel related industry who need to be supported through a just transition. A changing climate exacerbates inequality on all levels, it is a class, racial, feminist, intersectional issue.

“When I look back at history, change was never made by sitting around and asking our governments nicely. It happens by making noise.

“I feel excited to be a small part of such a big and empowering climate justice movement.”

Story: Jacqui Bennett. Photo: Supplied, of Caitlin and her sister. Caitln is on the right holding the respect your mother poster.