Every day, in the quiet of the dawn, 96-year-old Geelong artist Jack Bayley can be found making art, as he has done for decades. “Some people call me pigheaded, but I can’t help myself,” Jack says. “It is the passion for doing this that keeps me awake at night and the feedback I get from others is that it ‘just looks right’.” 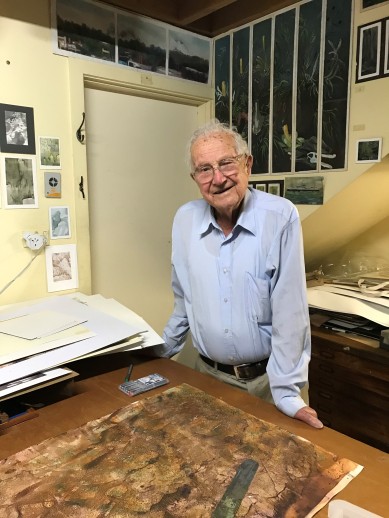 Jack trained locally and has experimented with a wide range of styles, including abstract and realist landscapes, portraits and still life in pencil, charcoal, acrylic, oil and water colour.

The medium Jack uses now is acrylic on paper, with a technique that took several years to develop during his 80s when he took up art with a vengeance after moving into town from Ocean Grove with his wife Shirley. Jack is on a mission to share the result of his metaphysical discovery. He wants others to share his joy and sees his work as a calling.

“I do not know daily what may be revealed,” Jack says. “I can’t get away from the fact that what I see is awe-inspiring which is a stumbling block I’ve had for years. It comes through me. As soon as I say to people I don’t do it, that nature does, they close the door and walk away. That’s the stumbling block and it’s been going on for years.”

He does not sign the work; rather he uses his initials to lay claim to the revealing process but never claiming to have painted the pieces. Every JB artwork is an abstract treat for the senses. The viewer is desperately curious to know how it’s done, but satisfied that the unique and original piece was revealed through meticulous timing and balance.

Nature takes over in Jack’s art. With each piece, the audience can’t help but feel nature knows where it’s going as it heads for equilibrium not chaos. Much of the work is produced on recycled paper and card. His colour use is based on what is available to him, although he prefers to stick to the earthy tones.

“I believe it is metaphysical, the work is dynamic and takes on a life of its own,” Jack says. “I never know what’s going to happen next.”

For just the second time ever, Jack is exhibiting his work in a bid to let others enjoy this body of work. His exhibition Chaotica is on at the Rachinger Gallery in Eastern Hub, Geelong. The exhibition can be viewed from 9am to 5pm weekdays and 9am to 1pm Saturdays, and will run until November 30. https://www.facebook.com/events/397153824527276/

Jack is a scientist who worked at the Australian Paper Manufacturers in Melbourne until his retirement in 1980. He’s spent the last few decades in Geelong. He’s also a keen gardener and you can view his gardening work outside McDonald’s on Yarra Street. His other passion is philosophy and he attends classes every week through U3A.