Seven-year-old Holly is not only a member of Geelong Beekeeping Club but she is also part of Transition Street Newtown for kids. She has a love for gardening, making teas and garden science projects. She wants to see little people taking an interest in gardening and recycling. “They can recycle their toys and clothes for use in the garden to make wonderful outdoor play items.” 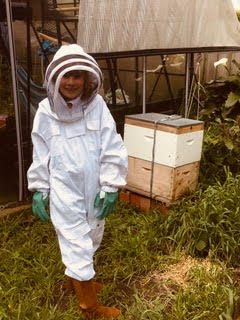 Holly has appeared on Vasili’s Garden Show on Channel 7two. She spoke with her mother about ‘Growing Food! Skills for Children and Adults’ at The Eastern Hub, Geelong on 19 January where she received an overwhelming response. Considering she is only seven she is a confident speaker in front of a large audience of adults. She’ll be speaking once a month in a Transitions Street Newtown group to encourage children to garden and enjoy all that nature has to offer that commenced on 26 Jan 2020 for a group of up to 8 people.

How did Holly become so passionate about gardening? Since the age of 6 months, Holly was encouraged to get her hands dirty. She grew up with a goat called Maggie, 12 beehives, 172 fruit trees and loads of bountiful vegetables on a 1000sqm block in Coburg. Her mother made yoghurt, spaghetti, cheese, grape juice and baked breads.

Holly started making her own herbal teas when she was 4 years of age, picking leaves of plants and putting them in hot beverages.  Now she makes different kinds of edible slime using mint, cinnamon, pansies and fennel.

She’s since moved to Geelong and her school encourages recycling. She made her own rocket using materials made from a water bottle, plastic spoon, tyres from an old car and a battery from a toy. “It moves forward and the cats love to chase it.” 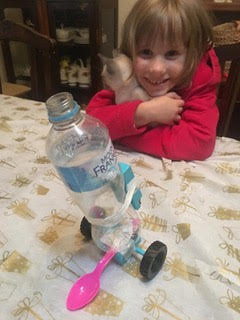 Holly especially enjoys extracting honey from her beehives and loves making honey lip balm and honey face cream with her mother. But she tends to eat most of the ingredients because “if you can eat the stuff you shouldn’t put it on your face,” she says.

She made an edible market garden for her bees and often she is found picking the flowers for her next creation, like these ingeniously made Holly Lolly Pops for her friends and school.

Holly’s message to the children of the region is “Get out and have fun and enjoy making garden experiments with fruit and vegetables from the garden.”